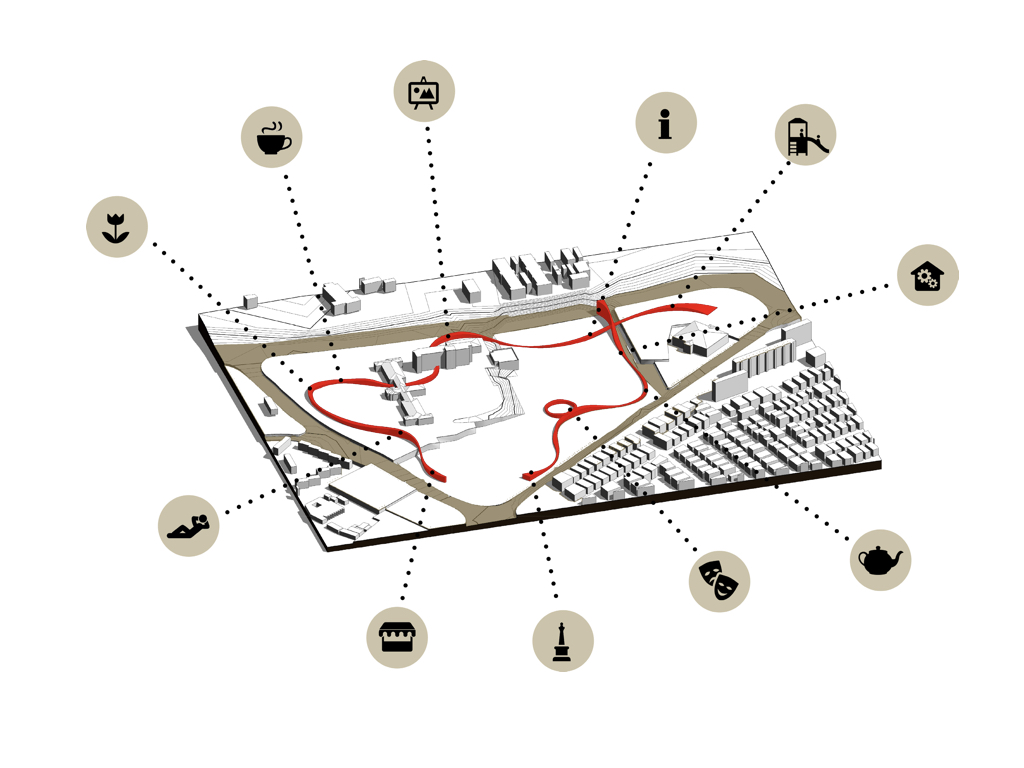 HETEROTOPIA(NS): The Story of a Wall

[A problem has been put before us. A unique solution was required. Theoretical basses have been given. The groups were formed, strangers collided, verticality was established – how strange. Manifestos were written. Thoughts were intertwined. Emotions grew. The work began.]

The urban fabric of the Turkish capital rests on undulating Anatolian steppe colored by yellow parched grass. In magical silence. The fabric is inwrought with strange entities. Thick thread of wide boulevards, pounded by the thunder of 2 million engines, is flanked by narrow and scarcely used sidewalks. The thick thread disperses into smaller and smaller string of streets, finally ending in quietest residential dead ends. But how alive!

The in-between of the grid is populated by variousness. Somewhere scattered residential complexes, somewhere houses with gardens, somewhere tall business towers. Somewhere the slums and somewhere the parks or sports fields with green, green grass meticulously flooded throughout the seasons. Somewhere the city’s monuments, and somewhere shopping malls, somewhere slums. And somewhere … an ominous mystery, walled behind a well-guarded wall. With armed guardians and barbed wires, under constant surveillance of the nervous passer-by. These military areas are well rooted in the fabric of this city, so well that nobody remembers the absence of their ubiquity. And very few know of the life behind these walls.

What do we feel? Fear and insecurity. As we walk around the guarded walls, next to the armed guards while we try to take occasional clandestine photo and make notion of this incidence before us. From time to time we just catch a glimpse of the shapes and textures inside. An unknown labyrinth which in our minds can only hide a dangerous beast. It is its home and the beast knows its walls. So, without Ariadne we stay out, on the safe edge. And these walls don’t have windows but they do have cameras. And microphones. Seen and unseen, but always watching and listening.

Now we understand this concept, as we finish the ninth circle around it. We understand the mechanism of power, we understand the diagram of this Panopticon, which imprisoned the whole city and submitted it to its ominous gaze. So, we keep our head down and we keep walking. But our heterotopian hearts tremble.

And how do we deal with that? We cry or we laugh. Personally, we choose the latter, because one smart man pointed out that there is less cleaning to do afterwards. We busy our hands with collaging humor as we battle the instinct of fear before this military walls. And residential walls, and shopping mall walls, and park walls, and office block walls. And Ankara Kalesi walls. Walls, walls, walls. Walls everywhere. Ankara, a city in itself, walled stronger then Jericho.

But we are no fools. We know that inside, the ominous watcher is safe and warm and with friends enjoying a cup of sugarless čay. What is a threatening warning for us, is the edge of safety for him. Or her. Or o. The moment of this cognition led us to think of the notion of transformation. This walls, after all are not here without purpose. They became a part of Ethos. So, we think, what can we do with them? We are, after all, in the busyness of rethinking,so we rethink what is taken for granted. We rethink the wall.

Thus, we reach another cognition, we are like Pandora, holding a close box given to her in her hands. The inside of the box could be filled with monsters and labyrinths, but also with lush gardens, or diamonds and gold. Or with kunefe and Maraš ice-cream, my personal favorite. Or with all of it, until the box is unopened. Then, by Schrodinger’s definition, our opening will define the causal incidence. We must therefore be mindful with the opening of the box. And with deconstruction of the mental walls. But also, playful, like Pandora’s nephew to whom this is all just a game.

We play then with this new wall of ours. Opening, closing. Opening and closing. We play to brake the fixed block in our minds, to start the game, to find the rhythm. Play is always free and unbounded and that’s why we blindsightedly draw regarding nothing but the outer edges of our box. By drawing, our hands find possibilities which our bounded minds could not. In our artistic approach, we create a catalogue of shapes, non-contextual and non-related to anything but the ephemeral dictate of our hands. We have started at last!

With that in our enthusiastic minds, we apply the shapes of our catalogue to the reality of the context. Our play then becomes two-sided, we shape with the shaping’s of the contest. Step by step, side by side, meter by meter, with openness and with closeness, all the way to the final form of our redefinition of a wall. Artistic non-contextuality then goes through the shaping hands of contextual reality into the hands of parametric randomness which creates millions of computergenerated variables of height and width. Our artistic catalogue joins sides with our parametric one, and with clear image of numerous possibilities we pick the shoutable ones for the keynote of our rethinking of a wall – it’s functional habitability.

So this new notion of a wall does not just wall-in and wall-out people, events and spaces. It also walls-within. It inhabits the function. It enables the happenings. Through it we show to the people living in a world of identical unanimous walls, what else can constitute of wall. What else can a wall constitute. So, our wall becomes a

A SUNDECK, a running track, a market place, A SUMMER STAGE, a resting place, an art gallery, a public monument, A CANNOPY – HAMMOPY, a playground, A THEATRICAL GAP, an outdoor cinema, a SKATE PARK, a winter garden, a public garden, A BRIDGE, a workshop place, a board game park, A POOL, a coffee shop, A NIECHE, a religious facility, a tea shop, a patisserie, A TREELINE, a smit place, an infirmary, A MONUMENTAL ENTRANCE, a tourist information office, a bicycle park areas, A FOUNTAIN, a security point, an outdoor dance hall, a bicycle repair workshop, A KIOSK.

But what of the inside? The bounding edge of our wall now looping up and down with its shape defined by contextuality and inhabited functionality. What do we do on the inside? We contrast. We create dichotomy which affirms duality. We introduce the grid. Abstract. Precise. Carthusian. Independent of all but the natural inclination of the terrain. Supported by contextual membrane of our wall. The rhythm of the grid is …-A-B-A-B-A-B-… and some of its fields are covered with green, green grass, some of them with parched yellow one. Some of the grids are communicational threads, and others are gathering places. Some of the fields have shopping units, some of them outdoor playground sites. Park then slowly becomes like the geometrically arranged image of the city. Park like the fabric of a city, city like a fabric of its park. Affirmed with the interplay of the dichotomy and bounded in itself. Accepted.

[A problem has been put before us. A unique solution was found. Ideas for the makette were given. The sleeplessness took over but was defeated. Hard times were endured. Battles were won. Through hard times and through the easy ones, the group held strong. Verticality was horizontalized – how beautiful. To whom it may concerned, listened. Both approved and disapproved. Comments were given, lessons were learned. Then the group withdrew in itself. Photos were taken, hands were intertwined. Hug powers were shared. Tears were shed. Bonds were bonded. Forever. The work has ended.]